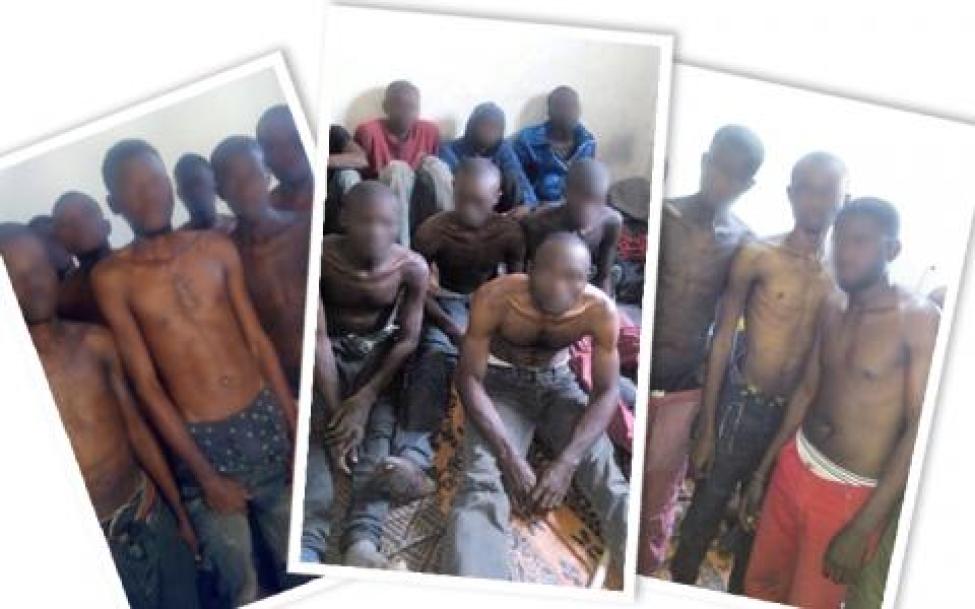 Libya - Over the past weekend, IOM staff in Niger and Libya documented shocking events on North African migrant routes, which they have described as 'slave markets' tormenting hundreds of young African men bound for Libya.

Operations Officers with IOM’s office in Niger, reported on the rescue of a Senegalese migrant (referred to as SC to protect his identity) who this week was returning to his home after being held captive for months.

According to SC’s testimony, while trying to travel north through the Sahara, he arrived in Agadez, Niger, where he was told he would have to pay 200,000 CFA (about USD 320) to continue north, towards Libya. A trafficker provided him with accommodation until the day of his departure, which was to be by pick-up truck.

The journey – over two days of travelling – through the desert was relatively smooth for this group. IOM has often heard from other migrants on this route who report seeing the remains of others abandoned by their drivers – and of trucks ransacked by bandits who siphon away their fuel.

SC’s fate was different. When his pick-up reached Sabha in southwestern Libya, the driver insisted that he hadn’t been paid by the trafficker, and that he was transporting the migrants to a parking area where SC witnessed a slave market taking place. “Sub-Saharan migrants were being sold and bought by Libyans, with the support of Ghanaians and Nigerians who work for them,” IOM Niger staff reported this week.

SC described being 'bought' and then being brought to his first 'prison', a private home where more than 100 migrants were held as hostages.

He said the kidnappers made the migrants call their families back home, and often suffered beatings while on the phone so that their family members could hear them being tortured. In order to be released from this first house, SC was asked to pay 300,000 CFA (about USD 480), which he couldn’t raise. He was then 'bought' by another Libyan, who brought him to a bigger house – where a new price was set for his release: 600,000 CFA (about USD 970), to be paid via Western Union or Money Gram to someone called 'Alhadji Balde', said to be in Ghana.

SC managed to get some money from his family via mobile phone and then agreed to work as an interpreter for the kidnappers, to avoid further beatings. He described dreadful sanitary conditions, and food offered only once per day. Some migrants who couldn’t pay were reportedly killed, or left to starve to death.

SC told IOM that when somebody died or was released, kidnappers returned to the market to 'buy' more migrants to replace them. Women, too, were 'bought' by private individuals – Libyans, according to this witness – and brought to homes where they were forced to be sex slaves.

IOM collects information from migrants returning from Libya and passing through IOM transit centres in Niamey and Agadez. “Over the past few days, I have discussed these stories with several who told me horrible stories. They all confirmed the risks of been sold as slaves in squares or garages in Sabha, either by their drivers or by locals who recruit the migrants for daily jobs in town, often in construction, and later, instead of paying them, sell their victims to new buyers. Some migrants – mostly Nigerians, Ghanaians and Gambians – are forced to work for the kidnappers/slave traders as guards in the ransom houses or in the ‘market’ itself,” said an IOM Niger staffer.

During the past week, IOM Libya learned of other kidnapping cases, like those IOM Niger has knowledge of.

Adam* (not his real name) was kidnapped together with 25 other Gambians while traveling from Sabha to Tripoli. An armed Gambian man and two Arab men kidnapped the party and took them to a 'prison' where some 200 men and several women were being held.

According to this witness, the captives were from several African nations. Adam explained that captives were beaten each day and forced to call their families to pay for their release. It took nine months for Adam’s father to collect enough money for Adam’s release, after selling the family house.

Adam said the kidnappers took him to Tripoli where he was released. There, a Libyan man found him and due to his poor health condition, took him to the hospital. The hospital staff published a post on Facebook requesting assistance. An IOM colleague saw the post and referred the case to an IOM doctor who visited him in the hospital. Adam spent 3 weeks in the hospital trying to recover from severe malnutrition – he weighed just 35 kilograms – and the physical wounds from torture.

Upon release from the hospital, IOM found a host family who sheltered him for approximately one month, while the IOM doctor and protection colleagues made frequent visits to the host family to provide Adam with food and medication and assist him with his rehabilitation. They also brought him fresh clothes.

Adam was also able to call his family in the Gambia, and after his condition stabilized, he was assisted by IOM Libya’s voluntary returns programme. On 4 April, he returned to Gambia.

The IOM doctor escorted Adam to Gambia where he was reunited with his family and immediately hospitalized. IOM Libya will continue to pay for his treatment in Gambia and he will also receive a reintegration grant.

Another case IOM learned of this month, involves a young woman being held in what she describes as a warehouse near the port in Misrata by Somalian kidnappers. She is believed to have been held captive for at least 3 months, although the exact dates are unknown.  Her husband and young son have lived in the United Kingdom since 2012, and they have been receiving demands for money.

It has been reported that this victim is subjected to rape and physical assault. The husband has paid via family and members of the Somalia community USD 7,500, although they have recently been told the kidnappers are demanding a second payment of USD 7,500.

“The situation is dire,” said Mohammed Abdiker, IOM’s Director of Operation and Emergencies, who recently returned from a visit to Tripoli. “The more IOM engages inside Libya, the more we learn that it is a vale of tears for many migrants. Some reports are truly horrifying and the latest reports of ‘slave markets’ for migrants can be added to a long list of outrages.”

Abdiker added that in recent months IOM staff in Libya had gained access to several detention centres, where they are trying to improve conditions. “What we know is that migrants who fall into the hands of smugglers face systematic malnutrition, sexual abuse and even murder. Last year we learned 14 migrants died in a single month in one of those locations, just from disease and malnutrition. We are hearing about mass graves in the desert.”

He said so far this year the Libyan Coast Guard and others have found 171 bodies washed up on Mediterranean shores, from migrant voyages that foundered off shore. The Coast Guard has also rescued thousands more, he added.

“Migrants who go to Libya while trying to get to Europe, have no idea of the torture archipelago that awaits them just over the border,” said Leonard Doyle, chief IOM spokesman in Geneva. “There they become commodities to be bought, sold and discarded when they have no more value.”

Doyle added: “To get the message out across Africa about the dangers, we are recording the testimonies of migrants who have suffered and are spreading them across social media and on local FM radio. Tragically the most credible messengers are migrants returning home with IOM help. Too often they are broken, brutalized and have been abused, often sexually. Their voices carry more weight than anyone else’s.”